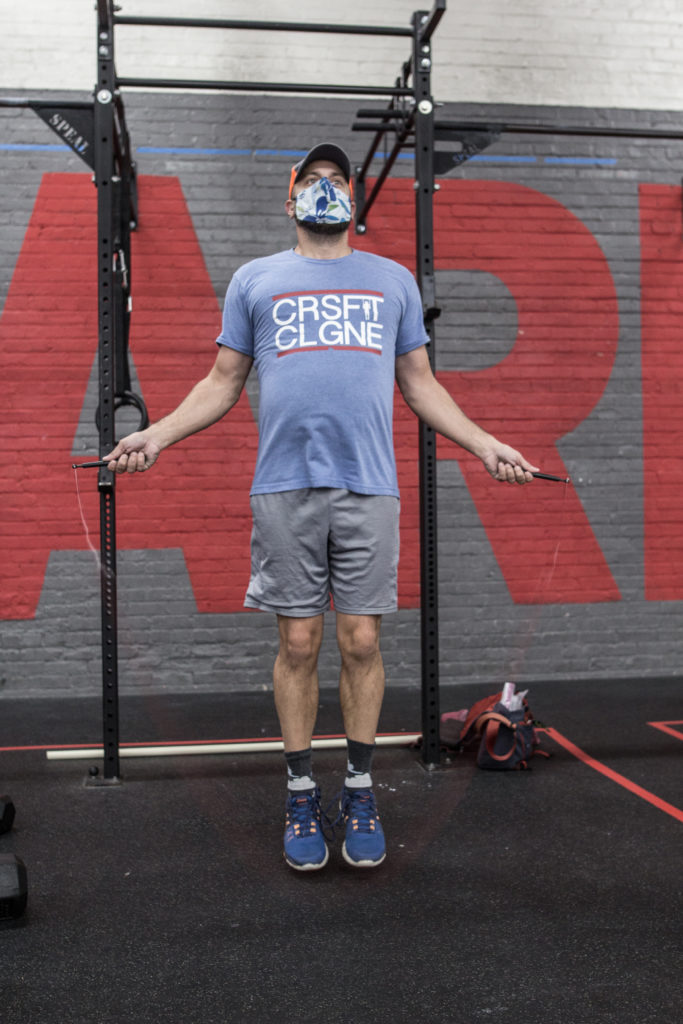 TELL US A LITTLE BIT ABOUT YOURSELF. WHAT DO YOU DO OUTSIDE OF THE GYM?
I am currently fun employed thanks to “Rona. However, my usual job is being a Company Manager (Tour Manager) for touring Broadway musicals (Les Mis, Phantom, etc). It sounds like a cool gig, but it’s basically being Mrs. Garrett in a world full of Natalies (for you youngsters, that is a Facts of Life TV Reference). My next gig is “The Prom” national tour which should start rehearsals in the fall. Being Company Manager means everyone reports to me and I am ultimately in charge of the whole deal (travel, payroll, HR, housing, etc.) It’s the strangest job that nobody knows about. The job is fairly stressful with lots of little fires to constantly put out. As you can imagine, everyone is fairly dramatic and tears flow fairly easily (theirs, not mine, I have no emotions) . A flight delay will make some people act as though I just kicked their mothers in the face and that I am personally responsible for weather. I also tell everyone that I am a lifelong competitive swimmer (Chicago Smelts), but with the pools being closed, there is no way to check me on that.
WHAT INITIALLY GOT YOU INTO TRAINING AND WHAT KEEPS YOU COMING BACK?
As I was turning 40, I was noticing that I was starting to walk like my 75 year old father (who was my high school football coach) and I had to switch things up. At the time I was constantly throwing my back out and needing a chiropractor every few weeks. With traveling so much (90% of the year) I wanted to find an outlet that I could socialize with people that were not my employees and be able to have real conversations with normal people in addition to a workout that would kick my ass. A few of my friends on tour all started training for CrossFit, after a few weeks, I was the only one left doing it. Currently, I am now up to almost 100 different boxes all over the world, which is something I am sort of proud of. So if you ever need a recommendation, I can give you a few. It’s really a cool thing to drop in and experience different coaches, styles, athletes, etc. Plus, they haven’t heard any of my stories, so they still think I am charming, somewhat funny and obviously extremely handsome. My favorite is going to a box in a foreign country and not understanding a single thing that the coaches has to say, but a squat is a squat in every language. I went through an entire workout in Copenhagen in which the coach realized at the end of class I had no idea what he was saying, he just thought I was really dumb.
On a separate note – I once nailed Sarah really hard in the face during dodgeball and I feel like I can never leave until she has had her revenge. Until then, I live my life in fear. WHAT ARE YOUR FITNESS GOALS? HOW CLOSE ARE YOU TO REACHING THEM?
Is this the section that I lie? My next goal is to be Athlete of the Year (watch out Lucy & Emma!) After partially tearing my Achilles 2.5 years ago, I’d love to be able to do double under’s again. But singleunders are so much easier. For a hot second last year, I thought I might be able to get bar muscleups, but I’d rather just eat a pizza.
WHAT’S AN ACCOMPLISHMENT OR GOAL YOU’VE REACHED AT HARDWARE THAT MADE YOU THE MOST PROUD?
Oh, wait, THIS is my humblebrag section! I would probably say that I am most proud that I when I make it through a workout without getting a coach frustrated with me from my constant talking or being a smart ass. Can you imagine how terrible I was to my own father when he was my coach? Are you sure you are giving AOTM to the correct Joel? #uncoachable
FAVORITE WOD/MOVEMENT?­­
I am really good at resting. If the open had a whole workout of resting, I would totally nail that. I am also really good at not collapsing on the floor after a tough WOD. Thirdly, I am pretty good at talking smack during a WOD. (Who chose this workout?) My current favorite movement is overhead squats, which is strange since I hate all other squats. It took me forever to figure them out and I love how much other people hate them.
LEAST FAVORITE WOD/MOVEMENT?
I hate doing any movement that requires my legs. Being a distance swimmer, legs are just extra weight to pull along. Also, I possess no fast twitch so I am crap at sprints, give me a really, really long aerobic workout any day. I will go the same pace for 3 minutes or 45 minutes. (And I am single, guys)
ANY ADVICE FOR SOMEONE INTERESTED IN TRYING OUT HARDWARE?
I tell people that this is Adult Gym Class but with all the kids that you most likely eat lunch with. Hardware is an extremely friendly, community-based box and that starts with George, Darcy, all the coaches and works it’s way down to all the members. Everything is scalable and yes, everything is goofy. We know it’s goofy and we have a good sense of humor about it (Fitness!). I mean, we jump on and off boxes for no reason. We throw a weighted ball at the wall for fun. We pay to do burpees. And to be cliche, we even can flip large tires. It’s all so silly and so much fun, especially when you like the other people that you get to work out with.