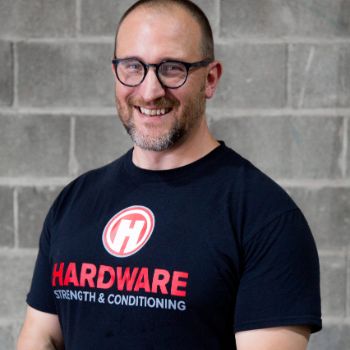 Growing up in Nevada & New England, Dana always played organized sports (football, wrestling, track). Never the best athlete on the field, mat, or court, Dana excelled at practice and especially loved the conditioning that everyone else seemed to hate. Shortly after moving to Chicago to pursue his doctorate, though, a knee injury and the bad habits of graduate school (not sleeping, heavy drinking, literary theory) caused him to give up the gym & turned him into an unhealthy adult. Having hit a low point around 2005, he worked his way back into a little better shape doing the globo-gym thing on his own. However, in 2009 while taking a long kayak trip on his honeymoon with Melissa diLeonardo (aka, Hardware’s yoga coach & the Chicago Reader’s Best Personal Trainer of 2013), Dana quickly realized he would have to up his game if he was going to keep up with her for the next several decades. A little internet research led him (and Melissa) to CrossFit Chicago where he rediscovered his passion for fitness (and met George). Six years later, Dana is a part-time personal trainer, a full-time dad, and the happiest he’s ever been.

As a coach, Dana is especially interested in helping people achieve their best balance between challenge & sustainability, between working harder than you ever have & having a whole lot of fun. As a proud member of the smart, diverse, and hilarious community that is Hardware, Dana is humbled by the opportunity to help make—and keep—you stronger & healthier.