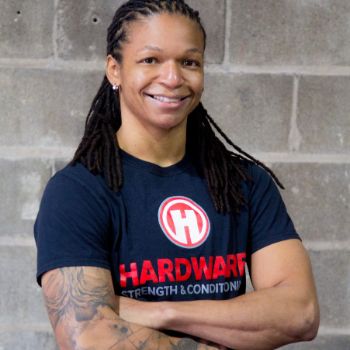 Darcy’s love for sports began at a young age and ignited a lifelong passion that still burns brightly. For Darcy, sports helped her to belong (even when most of her teammates and coaches didn’t look like her) and is what ultimately helped her stay focused, taught her leadership and gave her purpose. She was a three sport athlete (volleyball, basketball and softball) from grammar school through college. Darcy received a Basketball, Volleyball and Softball scholarship to Oakton Community College and during her career at Oakton she was honored to be team captain for all three sports.

After college Darcy began her 8 year career on the Chicago Force women’s tackle football team, where she achieved some of her greatest athletic accomplishments. During her career on the team she was a national champion and was decorated with many individual awards every season, including the perennial team Defensive MVP and league All American. Her highest honor of all was being named Women’s Football Alliance Conference Player of the Year in 2013. After retiring from football Darcy was looking to become involved in a sport where she could challenge herself, while also feeling part of a team–and so began her journey with functional fitness.

As a fitness coach, Darcy enjoys utilizing her background of sports, fitness and nutrition, while celebrating diversity and inclusion and giving her athletes a platform where they are encouraged and empowered.

When Darcy is not working out, she enjoys spending time with her wife, son and their dog MJ!